Join us March 4 at Noon (CST) on Zoom

Craig Thorn
Partner
DTB Associates[/caption]Craig Thorn is a partner at DTB Associates.  He advises clients on issues related to agricultural trade, trade agreements and trade barriers, including regulatory barriers.  Before founding DTB Associates, Mr. Thorn spent over 15 years with the Foreign Agricultural Service (FAS) at the U.S. Department of Agriculture.  He headed the Agriculture Section in the Office of the U.S. Trade Representative in Geneva, where he represented the United States at the World Trade Organization on agricultural trade matters during final phase of the Uruguay Round negotiations.   He also served in FAS as Director of the Europe Division and Deputy Director of the Multilateral Trade Policy Affairs Division and as an attaché in the U.S. Mission to the European Union. 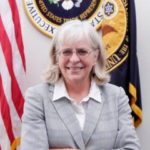 Sharon Bomer Lauritsen is the founder of AgTrade Strategies LLC, a consulting service on U.S. agricultural trade policies. She retired from the U.S. government in 2020 with 29 years of experience, most recently as the Assistant U.S. Trade Representative for Agricultural Affairs and Commodity Policy, Office of the U.S. Trade Representative, Executive Office the President.

Sharon served at USTR for 15 years leading agriculture trade negotiations for the United States, including with Canada, China, the European Union, India, Japan, Mexico, South Korea, and at the World Trade Organization. She also worked for the U.S. Department of Agriculture, Agricultural Marketing Service, for ten years in senior management positions, and five years leading the agriculture section of the Biotechnology Innovation Organization. She started her career in government relations for the United Fresh Produce Association.

Joe Glauber is a Senior Research Fellow at the International Food Policy Research Institute in Washington, DC where his areas of interest are price volatility, global grain reserves, crop insurance and trade. Prior to joining IFPRI, Glauber spent over 30 years at the U.S. Department of Agriculture including as Chief Economist from 2008 to 2014. As Chief Economist, he was responsible for the Department’s agricultural forecasts and projections, oversaw climate, energy and regulatory issues, and served as Chairman of the Board of Directors of the Federal Crop Insurance Corporation.

From 2007-2009, Glauber was the Special Doha Agricultural Envoy at the office of the U.S. Trade Representative where he served as chief agricultural negotiator in the Doha talks. He served as economic adviser at the so-called Blair House agreements leading to the completion of the Uruguay Round negotiations. He is the author of numerous studies on crop insurance, disaster policy and U.S. farm policy.