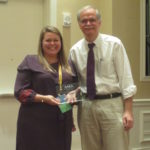 Associate General Counsel at the Office of General Counsel at USDA.  I am responsible for providing legal advise to three mission areas at the Department of Agriculture.  The Rural Development mission area is responsible for providing financial assistance for housing, business and utility infrastructure.  I am responsible for the Farm and Foreign Agricultural Services mission area, which is responsible for the traditional commodity program of the FSA, federal crop insurance and the international work that we do through the Foreign Agricultural Services, which can include trade, or donations of food internationally through US AID.  The third mission area is the food, nutrition and consumer services division.  The nutrition work at the Department involves the SNAP program, the school meals program in all schools, and WIC – Women with Infants and Children.  Unlike the other two mission areas, the food and nutrition area affects all of the United States whereas the other two are specific to rural America. So, my job is to make sure that the legal advice makes sense.  I directly advise three Under Secretaries and the Office of the Secretary.

How did you get involved in this work?

While I was in law school I was a clerk at USDA, mainly in the area of the Farm and Foreign Ag Services work.  And, then I was hired in the general law area at USDA doing employment law, FOIA, torte law, those areas that are not necessarily applied to a particular department within the agency.  Then I went back into the Farm and Foreign Agriculture services.  One of the big things I did at that time was the U.S/Canada Free Trade Agreement.  I was the Departments representative to the legal group that was responsible for what is now known as NAFTA.

I left the department and went to work at a private law firm and came back to the Department as a confidential assistant to the Administrator of what was then the Agricultural Stabilization and Conservation Service, which is now the Farm Service Agency. So, I’m one of the few lawyers within the department of General Counsel that also served as a client of the Office of General Counsel, which I actually think is really important.  I’ve been on the other side of the desk, sometimes with the people who now work for me.

In 1995, I spent about a year on detail with the Senate Ag Committee to counsel to the committee for what became the 1996 Farm Bill.  Then I came back into the Department to the office of General Counsel to be the legislative counsel for the Department of Ag.  I looked at all the testimony, I did drafting assistance for the Hill as well as for the department and administration.  During that time I worked on three really big pieces of legislation – the reauthorization of the research programs in 1998, the reform of the crop insurance in 2000 and the 2002 Farm Bill.  There were a number of smaller pieces that I worked on in that time, but those were the three main, big things I got to be a part of.

Then I left that position to become the Associate General Counsel of Rural Development and Crop Insurance and the Farm Loan programs within FSA.   So, I had portion of the Farm Service Agency, and all of Rural Development and Crop Insurance. Those areas where all split when the Farmers Home Administration was reorganized in 1994, so I was stretched across a combination of agencies with an odd role for a while.

When the Office of General Counsel finally did reorganize in 2013, I then took over the rest of the Farm Service Agency and the Nutrition work that gives me the job I have today.

The big challenge is going to be determining what the role of the federal government is going to be and what that looks like in practical terms.  In each of the spaces I work in, there’s this discussion of roles and responsibilities of government agencies. Within Rural Development we need to talk about, is the role of government going to be just to pass on those dollars, or are we going to use our programs and finding as a magnet to attract additional capital?

With respect to the farm programs, I think we need to ask if we’re going to continue with the same basic structure of the commodity price supports of the crops we’ve done over time, or is the role going to change to focus on specific types of risk management? Risk management is very tied to current market conditions.  So, when prices were high, crop insurance chased that high and very effectively addressed the 2012 drought instead of providing support at an established price under Title 1.  But, what goes up can come down and as crop insurance chases the market down, then insurance payments do too.  So, again, we need to look at appropriate role of government in terms of Title 1 and the Risk Management programs.

Within the nutrition programs, the role is strictly a question of the role of those programs and if those programs belong in the Farm Bill.  Those have been discussed at length and are going to continue to get more attention about the appropriate role of government.

How did you find AALA and what keeps you involved?

During my short stint in private practice, a colleague found AALA and we decided to attend as a way to recruit clients and look for work.  I found that it was an interesting place and that it’s a reasonably safe place where government, private practitioners, and academics can have a discussion.  The perspectives are very different and I always learn so much about what people are thinking outside of the bubble that is Washington DC.  I know that to be good at my job I have to be able to see and hear people outside the beltway and know what’s going on in the countryside.

You were presented the Distinguished Service Award at the Symposium this year.  What was your reaction?

I was overwhelmed which is why I didn’t say anything at the conference.  I have always had a great time at AALA and really enjoyed the people.  I was just overwhelmed that people would think of me in that way.  I was humbled and honored to receive this award from folks that I respect so much.