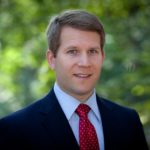 Candidly, I stumbled into my agriculture law career when I applied for a job as North Carolina Farm Bureau’s congressional lobbyist. After about a year serving as an advocate for farmers on Capitol Hill, I was hooked on agriculture law issues, so much so that I decided to earn my law degree at night while keeping my lobbying job. From there, I have had an incredible opportunity to help North Carolina farmers focus on doing what they do best—growing crops and raising livestock.

From my perspective as a legislative advocate, one of the major challenges facing North Carolina farmers—and perhaps farmers across the nation—is the general public’s lack of knowledge about production agriculture. Farmers have to do a better job of engaging with their urban-minded neighbors who may hold romantic notions of farming. Accordingly, Farm Bureau and other agriculture organizations must encourage and enable their farmer-members to tell their stories because those stories matter a great deal in our heavily partisan and divided society.

On the positive side of things, more often than not, farmers are able achieve legislative and regulatory success, notwithstanding the general public’s unfamiliarity with agriculture. In my mind, that’s because legislators, for the most part, understand that farmers, like all business people, need clear legal rules to be profitable. It also doesn’t hurt that farmers are, generally speaking, well-regarded in the public mind.

As an ag lawyer, I’ve seen too many farmers get poor legal services because their attorneys were unaware of agriculture-specific statutes and rules or unfamiliar with agriculture in general. The good news is AALA has an opportunity to help educate our colleagues and prepare them to better represent farm families and agribusinesses. Further, there is a growing interest in agriculture law in the legal community. Hopefully, this will translate to farmers having increased access to high-quality legal services when they need them.

I joined the organization in 2013 because Ray Starling, a former AALA board member, asked me to attend the 2013 Ag Law Symposium. In making his pitch, Ray said AALA was the preeminent agriculture law organization in the nation and that I would be able to build a strong professional network to help me be a better ag lawyer. He was 100% correct. As an AALA member, I’ve grown as a lawyer and a person, and developed a robust national network of lawyers who help me do my job.

But the primary reason I’m active in AALA is because I sincerely enjoy working with and learning alongside outstanding ag laywers who are also wonderful people. An organization is only as strong as the people who run it and at AALA we’re strong and growing stronger.

I am glad to talk with AALA members further about my work and career.