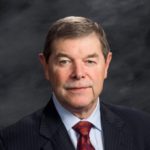 “Equally comfortable in blue jeans or a suit, Larry R. Gearhardt moves with ease from his small family farm, raising crops and livestock, to the Ohio Statehouse, lobbying on behalf of Ohio agriculture. Gearhardt began his career at a local general civil practice in 1979, before transitioning to the Ohio Farm Bureau as an attorney and legislative analyst in 1991. He now serves of counsel at Barrett, Easterday, Cunningham and Eselgroth and volunteers with Ohio Northern University’s Agricultural Law program – the only one of its kind in Ohio and one which Gearhardt was a driving force in establishing.

“In his distinguished career, Gearhardt has made significant impact on agriculture’s political landscape. He was an advocate of private property rights, battling government’s overuse of eminent domain and strengthening landowner rights through his time on Ohio’s eminent domain task force. Gearhardt was a major force in instituting the “Fast Tractor Law,” which resulted in the adoption of speed identification symbols, as well as legislation involving weight variances, slow moving vehicle signs and the use of dual wheel tractor lights.

“Gearhardt is known for his willingness to listen and advise, no matter the situation: whether it is an intentional phone call or a casual conversation in the grocery store, diner or local sporting event. He has spent his career perpetuating the advancement of agricultural law and serving as an ambassador to the farming community, political arena and beyond.”