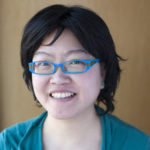 I am an Associate Professor of Law at the University of Wisconsin School of Law in Madison.  My day to day work is research, writing, teaching and doing university service.  I teach subjects like administrative law, contracts, food and agricultural law and environmental law.

I take a Science, Technology, and Society Studies perspective to my work.  I try to teach not only the actual science but also how society engages with science.  That is, for instance, if you have a legal decision and if one of the criteria is protection of health and the human environment, then you ask, what kind of scientific studies do you bring in to that?  And, how does a court, not necessarily science savvy, incorporate science and respond to it?  So, I try to engage my students in that, not necessarily to directly bring in all the science but to ask questions about how institutions engage with science.

How did you get involved in agricultural law?

I’ve always been really interested in general in food systems and the processed food endpoint part and also the growing of food.  I became interested in researching the legal aspect of it because of my teaching in Wisconsin.  It’s an agricultural state and my students were interested and asking questions.  So even though my practice area has been more administrative and environmental, I’ve moved into researching and teaching more food and agricultural issues so that I had relevant information to engage my students.

You received the Scholarship Award from AALA for writing Whole Foods: The Food Safety Modernization Act and the Challenges of Defragmenting Food Safety Regulation, 41 AMERICAN JOURNAL OF LAW & MEDICINE, 447-458 (2015).  Tell us about that paper and your award.

First off, I was so excited to win the award.  Really, it was a huge surprise and a really big honor.

The paper was on how there are more than ten federal agencies that are involved with some aspect of food safety regulation.  That’s shocking to a lot of people to know there are so many federal agencies involved with the regulation of food production and safety.  There are so many pieces of it and my paper explores kind of the coordination or lack of coordination that goes on between all the different types of agencies that do food safety.
Because, if we don’t understand that, the different types and levels of food safety regulations coming from the government are going to be maybe duplicative, maybe haphazard, maybe uncoordinated if it doesn’t have more of a single vision.  That’s not good for anyone whether you’re trying to find out what you’re eating, taking a policy approach, or if you’re the one being regulated.

Where do you see that going in the future?  What are the Challenges and Opportunities?

One of the big roadblocks in food safety regulation is the overarching federal statutes charging agencies with regulation are so piecemeal.  All the different aspects of food safety are just scattered and split up between these ten agencies.

It’s not really high on congressional priorities, but if there were a coordinated Congressional approach we could probably easily solve a lot of these frustrations quickly.

Without that action and priority from Congress then it takes some kind of executive role to pull all of this together.

Without getting political, we just don’t know what’s coming in the next four years, or what we can expect in terms of food safety reforms.  President Trump just hasn’t said anything on this topic.  So, without any substantive comment from the new administration, I am just not sure what we can expect to accomplish which means we continue along with this scattered approach.  I just don’t know.

How did you find AALA and what keeps you involved with AALA?

The 2016 Symposium is the first official meeting I attended.  I actually snuck into one when they had their symposium in Madison, Wisconsin.  I’ve been involved with colleagues who are much more strongly involved.  Susan Schneider is so active and I’ve known her for years.  I have a number of colleagues and friends who are in academia who are much more regular attendees of AALA.  I really enjoyed going to the symposium this year and I really want to go more regularly.  Because of the topics I work on and the focus I have, I can see myself getting more involved with AALA in the future.